I wrote a great tweet yesterday that no one commented on. So naturally, I am going to blog about it.

"If it's a great idea, and no one wants to listen, keep telling people until they listen." -me

I live in NYC. Like most New Yorkers, I love exploring everything this city has to offer. One of the very best things is the public space - the gyms, parks, fields and courts.

But buying and carrying around a basketball, tennis racket, soccer ball, or bocce ball set can be a burden. Just like the Citi Bike ride sharing program, I want a 'play sharing' program for all the things that make public spaces so much fun.

I think the city would be willing to sponsor this, or at least put a grant toward it. It would help maximize the utilization of the public spaces. Never again would I have to see a sad tennis court on West Side Highway go unused, or a basketball court on Canal go untouched just because the great citizens of NYC can't find a ball.

Imagine a BLE-enabled locker that can be opened by a smart phone. Each item inside (balls, rackets, frisbee, etc) have a RFID tags so you know exactly what was removed when opened or put back in. Users would create an account and add a credit card. They could walk up to any of these lockers at fields, courts, parks, or gyms and rent a item for $5/hour or whatever. Then just return it when they are done.

Most of this technology exists, and I have seen the RFID stuff work for other applications, namely for inventory tracking. The lid could be controlled in a similar way to some of the new smart bike locks or even Citi Bike. This is doable.

Here is a really accurate and colorful drawing of what it could look like: 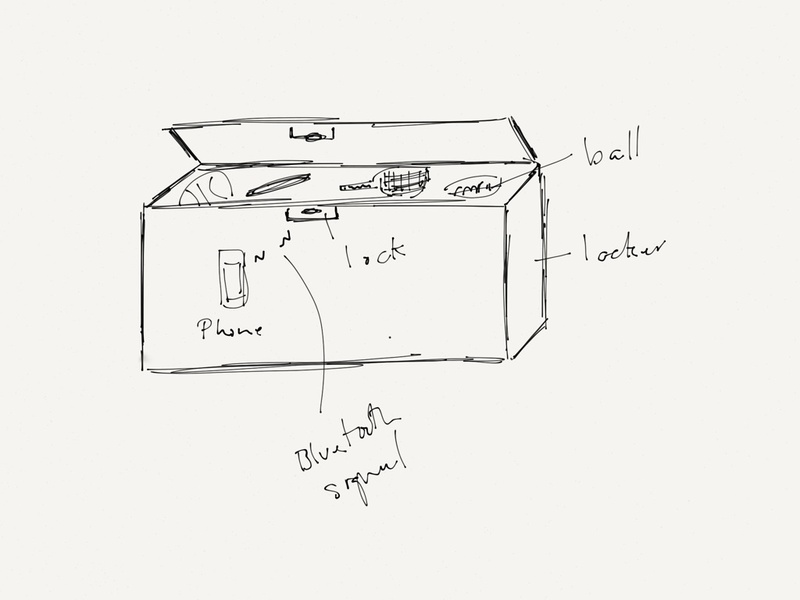